This blog (originally published in June 2016) is being re-posted following our WordPress account being hacked, resulting in the loss of all our blogs prior to June 2017.

The media circus has moved on from the London South Employment Tribunal, the day after Eva Carneiro (EC) settled her claim against Chelsea Football Club (CFC) and Jose Mourinho (JM) for constructive dismissal, victimisation and discrimination, for a reported £5 million. 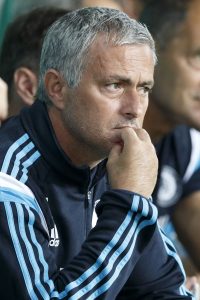 Jose Mourinho may now be pondering plans for his new employers, Manchester United, but for those of us watching this case it’s worth thinking about some of the employment issues that emerge from this.

If you’ve been to one of my executive briefings for key decision makers who want to feel confident in handling employment law related people issues, I’ve often referred to this case as it has progressed since last August when EC, the Chelsea first team doctor, attended to a player on the pitch in a game against Swansea FC.

JM became irate that this meant CFC were temporarily down to nine men, and subsequently announces that EC will not be on the bench in future, but rather she’ll be working with the ladies’ team.

So, what was EC’s subsequent case against CFC?

She had an immediate case of constructive dismissal, which is where an employer behaves so unreasonably (e.g. demotes someone) that an employee can regard themselves as having been dismissed by the employer’s action.

A few years ago there was a similarly high profile case when Stella English a winner of BBC The Apprentice made this sort of claim against Lord Sugar, and at the time I explored in my blog this whole concept of constructive dismissal and what employers can do to avoid a claim.

It appears that EC attempted to resolve the situation before resigning, which an employee can do, although normally it will have to be clear that the employee is resigning in response to the event or series of events. Some press coverage mentions a request for a salary increase to £400k to resolve the matter, but this was rejected.

Most significantly, her discrimination claim centred on a Portuguese phrase used in JM’s tirade which she says refereed to her as the ‘daughter of a whore”. Was it ‘filho” or “filha”, is the argument, and I don’t see why technical experts could not simply have analysed the video footage above to clear this matter up!

Some coverage suggests there were also health and safety claims, probably to do with the Club’s duty of care towards its players, and victimisation. This latter claim may have been that the reaction in the match against Swansea, or other events were attempts to victimise her because she had made the discrimination claims.

The ‘everyday’ lesson to learn here is that as is so often the case, a single event occurs, which then gives rise to other complaints which ordinarily, rightly or wrongly, an employee would just tolerate.

Again, as is often the case, these claims are about discrimination which opens the door to uncapped compensation, whereas constructive dismissal by itself is capped, with it being very unlikely that compensation would have exceeded £100k.

How common are out of court settlements like this?

Putting aside the reported size of the compensation agreed here, out of court settlement are very common. In fact, the system is designed to encourage them and figures suggest ACAS manages to conciliate 17% of all cases without a Tribunal, and a further 65% of cases are withdrawn before an application to a Tribunal is made.

2013 research (sorry there is nothing more recent!) suggests that median out of court settlements were about £2,500, and these are unlikely to have gone up due to the subsequent capping of unfair dismissal claims at one years’ salary.

In this case there was a preliminary hearing. Again, very common. The judge meets with the parties in private to clarify their cases, and there is always the hope that this meeting results in a settlement. It didn’t!

There were lots of opportunities to settle this matter, and there always are. Chelsea Football Club will have known for some time what Eva Carneiro was going to say in Court (they will have exchanged witness statements), so nobody can argue that they settled after they heard what the other side was saying in the first half day in Tribunal.

These opportunities to settle exist for all employers and employees, and in some instances it is worth an employer waiting until an employee approaches ACAS (they have to do this now) to see if a dispute that they have not been able to resolve themselves can be settled at this stage. Apart from anything else, ACAS can produce a settlement agreement (called a COT3) and there are no costs! You may not even need an adviser like myself!

Has Eva Carneiro really got the reported £5 million?

I think she probably has, but this sort of amount is unusual.

This was a very public affair, which may well have significantly damaged EC’s career, so she will have been looking for what is called ‘whole career loss’. We have seen another large amount involving a medical practitioner.

In 2011 Dr Eva Michalak was awarded £4.5 million for being hounded out of her job at Mid Yorkshire Hospitals NHS Trust. This is the largest ever award in the UK, and statistically, it’s a serious ‘outlier’, so don’t panic, or if you are an employee, rush out and make a claim. They’re very unusual.

Dr Carneiro may well have been earning twice the salary of Dr Michalak. Although she did not suffer the “chronic and disabling” results of the discrimination that Dr Michalak experienced, this incident may well have had a serious impact on her future career, not to mention the consequences on her personal life of being put through the media attention that has ensued.

So what are the more common levels of settlement in these types of cases?

I don’t want these figures to be used as an excuse for discriminating against employees, but I do often get asked by worried employers about the likely costs of a claim being made against them. In the last full year of published figures (2014/15) the maximum award for sex discrimination was circa £550k, but most significantly, the average was £23.5k and the median was £13.5k.

Many discrimination claims are genuine, many are genuine but only emerge because of some other incident such as redundancy or disciplinary action (in EC’s case, constructive dismissal), and many are unfounded but added to a claim to overcome the unfair dismissal cap and to put the employer on the defensive.

Returning to my opening question, was it all worth it?

Well, according to the press, EC looked pretty pleased with her lot when she left her home this morning, but don’t kid yourself that this will have been a walk in the park for her.

You might be critical of her reported efforts to increase her remuneration because of the incident, but from her point of view she has been vindicated for not settling at £1.2 million. She was demoted from her dream job in a field where she had a considerable reputation.

Clearly Chelsea Football Club thought, as I confess I did, that she may well not get £1.2 million from a Tribunal. The sides do sometimes play games with evidence such as not exchanging it by the deadline set by the Tribunal, so perhaps they really did not know what was coming until the first day.

Frankly, that’s not believable, so I’m afraid it looks like another own goal for football in general, and Chelsea FC in particular.